Tell About Your Trip Experience–Before Your Mind is Gone

I was thinking recently that I should be sharing a little bit more–and more often–about my travel experiences, so I decided to write something about the topic of sharing itself, and why I feel that it’s beneficial for us to share–not only others but for ourselves.

Sometimes, even though we’re in the middle of something—a job, a family thing, a big change, a whatever—we may feel the need to disconnect from it for a moment and think about something else. I am a Pisces myself so it’s only natural for me to daydream or suffer from the occasional wandering mind.

Purposefully or not, I believe that the key for me, of course, is not staying away from my projects for too long, else I run the risk of falling out of my groove or harming the good habits or consistency that I’ve built.

Today, as I sit here in the midst of my first full-length feature film and multiple websites, I found myself thinking about a subject that applies to my website, WhichCity: talking about travel-related situations and moments I’ve witnessed over the years–before I forget them!

Yep—while they’re still a bit fresh, I’d like to discuss some of the more interesting things that have transpired during my time abroad, and tell about some of my own trip experiences, before I lose my mind! Also, I hope that it would inspire you to both get out there, live your own stories, and then share them with others as well.

First off, I’m going to go back—way back—to my first trip out of America.

I was in high school at the time and the grandmother of a close friend offered to pay for me to accompany him, our other friends, and a couple of our closest teachers to a multiple-city trip to Europe.

Now at the time, it was quite impossible and improbable for my parents to spend so much as a dime on their second son and middle child to buy a ten-dollar water gun, much less get a passport and travel across the pond to see some ancient history. However, as fate would have it, my friend’s family really came through for me and the experience changed my life forever.

And I mean that with all of my heart.

The journey would last a couple of weeks and include Germany, England, France, and the Czech Republic. Technically, we traveled through Belgium, but unfortunately it was something we could only see by train as it rushed by. This was a bit saddening to me because I knew that one of my then-martial arts heroes–Jean Claude Van Damme–was from Belgium, but still, the countryside there looked great and it was my first-ever cross-country train ride.

It was a great travel experience via transportation, too! 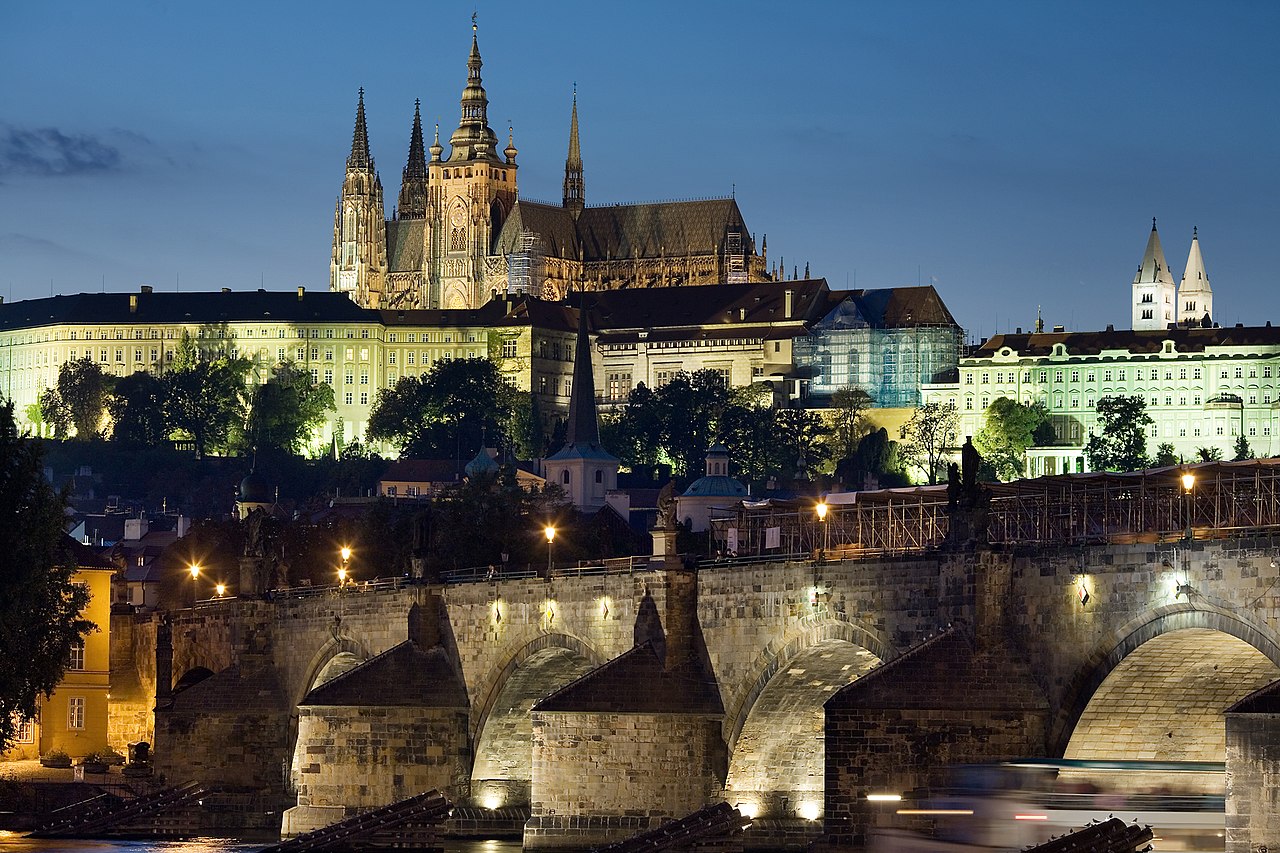 As a guy, my fondest memory of the trip was about, of course, a girl.

Well, I guess you could say a woman, because she appeared to be older than thirty to me.

At this particular time, we were staying at a hotel in Prague, in the Czech Republic, where we’d have a simple breakfast in the morning and then return later that evening for dinner.

The lady of my affections was a worker at the hotel, and I saw her occasionally as we came and went, as well as when we ate.

The first things I noticed about her were as follows:

Obviously this isn’t the girl I saw, but I do think about her often and what became of her.

At this time, I was quite young (I think around seventeen or so), skinny as a rail, and a complete noobie about anything having to do with women.

This situation had me more perplexed than it might otherwise, I think, because while I felt that she was definitely being more than just “nice,” I was also confused because it appeared that she could actually be twice my age.

Initially, I brushed this off as “Czech hospitality,” but it continued to happen nonstop–and fiercely–up to the point where I just had to say something to my friends and teachers.

During dinner on the last night we were going to be at the hotel, I noticed that she was refilling my drink but not those of my friends’. As per the usual, she gave me the same smiles and gazes, alongside the excellent service, as she poured my drinks beside my shoulder.

After seeing this, I couldn’t keep it to myself any longer–I just had to say something.

I finally told my friend and teachers about my feelings and observations, but their reactions couldn’t have been more different and were definitely indicative of the age and experience gap.

My friends immediately laughed at and attacked me as if I was full of myself, which, of course, was to be expected.They thought that I was just enthralled with her and thinking too much of myself, especially since she wasn’t my age and I was just a young foreigner here for a couple of days.

However, my school’s principal and the leader on our trip—a well-educated, traveled and cultured man—had completely opposite reactions.

I still remember the look on his face and his movements after I told them about everything that had happened since we arrived. He was calmly eating and listening and, after I finished, he lowered his eyebrows and I could see that he was thinking about it.

He picked up his napkin while my friends were lighting into me, and by the time they had a good go of it, he had wiped his face and placed the napkin onto the table. At this point, he told me that he was going to observe her for the rest of dinner to see if he could learn anything.

My friends were still steamed but, because of our principal’s response, they finally let it go and we moved on to other topics, discussing things with each other and some others from our tour group.

After some time, he had observed her actions as she served the table and then, finally, he leaned over toward me and made a gesture to let me know that he had seen enough.

He confirmed what I had suspected: she was indeed interested in me and showing it heavily.

This made me feel a lot better about my observations, but at the same time continued to cause me some confusion, due to differences and disparities in both age and distance (I was obviously from out of the country and not sticking around very long). It was then that he enlightened me which, as a highly-educated and proficient man, was something he did often.

He told me that in this culture at this time, women who aren’t married before the age of thirty will have trouble doing so later. He believed that, since I was a young foreigner, I was likely a good candidate for marriage: probably single and from a family with money.

You probably already know this, but quite often, in most countries, tourists are viewed as rich if not “well-off,” especially in poorer areas or to people who definitely aren’t well-off enough to travel). My principal pointed out that the combination of her low income and the “leftover woman” stereotype (I borrowed this term from the Chinese way of describing it) cause women like this to hone-in and focus on foreign guys like me.

I found the lady to actually be quite attractive and, truth be told, if I had stayed in the city for a longer time, I doubt I could’ve resisted going out with her at least once in order to know what type of personality was behind that strong gaze, shimmering hair, and intelligent smile.

When I asked him what the problem was with being over thirty, he said that it’s just a cultural thing–many men will think that if a woman hasn’t married by the time she’s thirty then perhaps something is wrong with her. If she was both beautiful AND “okay,” then why isn’t she married, they would ask. I thought that this was highly unfair and as an American, I found the thought to be absolutely ridiculous because no such stigma existed in my knowledge.

Ultimately, after his explanation, I was amazed and lost in thought for quite a while.

I began to wonder about her life, how much money she made, who she lived with, what family she had, if she even had a family, what did she do for fun, would she find a good and fair husband–and many other questions filled my mind.

I’ve always had a big heart and active imagination, so from that point up until today, I’ve often wondered what kind of life this girl has had.

I may never know for sure, but I like to believe that she found a great man who loved her for who she was and is—purple hair and all.

What do you have to say about your travel experiences?

Some of us don’t yet have any stories to tell, but travel memories have been for me–and many others–some of the most memorable parts of life.

Included in my travel memories so far are America, England, France, Czech Republic, Germany, Japan, China & Hong Kong, Thailand, Vietnam, Australia, South Korea. I will be adding a lot more to this list, for certain!

Don’t worry about being a “leftover woman” (or man!) — just get out there and live your life to the best of your ability and, of course,

« Podcast #2 – Shanghai Surprise or Beijing Duck? (Previous Post)
(Next Post) Which US Cities Have the Best Restaurants? »